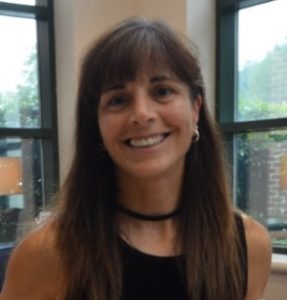 In 2020, C.J. Urse Hawkins begins her 13th year as Head Coach at Spain Park High School with anticipation and excitement for the upcoming season. C.J. Urse Hawkins (formerly C.J. Urse) is the youngest of her five siblings. C.J. graduated from Bishop Watterson High School in 1987. She was a four year Varsity letter winner in softball and basketball, two years in volleyball, one year in golf and soccer. She was a two time All-State shortstop and led her team in seven different statistical categories. As a senior point guard, C.J. helped her basketball team reach the State final game. She also competed in the State golf tournament as the only female member of the boy’s golf team. She earned a softball scholarship to The Ohio State University and was a four year starter in center field. At Ohio State, she earned Academic All-Big Ten honors from 1987-1991. Her sophomore year, C.J. Urse was named the Ohio State Softball Defensive Player of the Year in 1989 with zero errors. In 1990 junior year, C.J. Urse was 2nd Team All Big Ten and was a member of the 1990 Ohio State Softball Big Ten Championship Team. In 1991, senior year, C.J. Urse was named Co-Captain and was selected to the 1st Team All-Big Ten and All-Region teams in 1991. C.J. Urse also made the All Tournament Team at the University of Arizona Desert Classic. Ohio State earned a a first ever birth to the 1990 NCAA Regional Tournament as the Big Ten Conference Champions. She graduated with a Bachelors of Science degree in Physical Education/Health from The Ohio State University. After graduation, C.J. accepted the Graduate Assistant Coaching position at Florida State University under Head Coach JoAnn Graf (Inducted into the NFCA Softball Hall of Fame) and Asst. Coach Connie Clark (former Head Coach at the University of Texas in Austin). At FSU, C.J. Urse was responsible for in-state recruiting, slap/hitting instructor, outfielders and camp dorm coordinator. During the 1992 and 1993 seasons, the Seminoles made it back to back years to the College World Series and posting the second and third best team records in school history. C.J. graduated from Florida State in 1993 with a Master’s in Athletic Administration and Physical Education Curriculum.

In 1993, C.J. Urse coached at Hewitt-Trussville Junior High where her teams won the Jefferson County tournament two years in a row in basketball and softball.  In 1996, C.J. Urse was the first softball coach for the program at Clay-Chalkville High School. In the 11 years at Clay-Chalkville, her team made it to the state tournament 6 times and won the Area 9 times. C.J. Urse was named Jefferson County Coach of the Year in 2003, 2004, 2005, & 2006. C.J. Urse Hawkins has helped 88 athletes receive softball scholarships in 27 years of coaching (24 years of Varsity Head Coaching experience, and 3 years of Junior Varsity experience).

As Head Softball Coach at Spain Park High School, C.J. Urse Hawkins has high expectations for her athletes and a vision for the program to be one of the best in the state of Alabama. In 2010, Coach Urse Hawkins led her Jaguars to the first winning season in the history at Spain Park with a (26-24) record.  C.J. Urse Hawkins was named the 2010 South & Hoover Coach of the Year.  In 2011, Spain Park broke the school single season record with a (35-20) season.  C.J. reached her 500th win at the Bob Jones Tournament, Spain Park won it’s first Area Championship and reached the Regional Tournament for the first time in school history.  C.J. was named the Over the Mountain Coach of the Year and Metro South Coach of the Year.  In 2012, C.J. helped lead the Jaguars to back to back wins against arch rival Hoover High and #1 ranked Vestavia and earning her second straight Metro South Coach of the Year honor. In 2013, C.J. reclaimed the Birmingham News Metro South Coach of the Year. 2013, C.J. reached another milestone with her 600th win after defeating ACA in the semi-finals of the Wetumpka Tournament The Jaguars went onto to win at Wetumpka by defeating Scottsboro in the finals.

In 2014, Spain Park (49-17) overall record, made it’s first appearance in school history by reaching the State 6A tournament in Montgomery and finishing 5th out 64 teams. The Jaguars earned a spot in the State Tournament by advancing in the South Central Regional Qualifier & Area 8 Tournaments.  Spain Park also won the 2014 Northside Tournament & 2014 Shelby County Showdown Tournament.

In 2015, Spain Park (35-12) overall record captured another Area Championship while compiling a perfect (6-0) regular season Area record. Spain Park hosted and won it’s first ever 7A Area 8 Tournament & defeated Hewitt-Trussville in the finals 14-5.  C.J. Urse Hawkins reached her 700th win milestone in 2015 in Louisville, KY tournament.  C.J. Urse Hawkins was named the 2015 Over the Mountain Softball Coach of the Year.

In 2016, Spain Park (40-19) overall record season marked the softball program’s first appearance in the State Championship finals. In 2016, The Jags hosted the 7A Area 8 tournament for the 2nd year in a row after they earned the #1 seed in the regular season area. The Jaguars repeated as the 7A Area 8 Champions by defeating Mountain Brook, Hewitt-Trussville and Vestavia. The Jags went undefeated in both the 7A Area & Regional Tournament. Spain Park continued their hot streak and won their first 7A Regional Tournament in Tuscaloosa. The Jags defeated Hoover and Vestavia which earned a birth to the State tournament. At the 7A State Tournament, the Jags knocked off Fairhope, Central Phenix City, James Clemens in the quarterfinals, and Vestavia in the semi-finals. Spain Park got edged by Sparkman in the finals of the tournament to be 7A State Runner-Up in 2016. C.J. Urse Hawkins was named the 2016 Over the Mountain & Shelby County Softball Coach of the Year.

The 2017, Spain Park (47-9) softball team had the 2nd best record in school history. The Jags won five tournaments including The Central Phenix City Tournament, The Jaguar Classic, The Oxford Tournament, 7A Area Tournament, 7A North Central Tournament. The Jags finished 3rd in the state in 7A. C.J. Urse-Hawkins was selected as the 2017 Over the Mountain Coach of the Year.

In 2018, Spain Park (41-11) overall record. The Jags won it’s 4th Area Championship and finished 3rd at the 7A state Tournament. Tournament Champions at Oxford and Central Phenix City. C.J. was named Over the Mountain and Shelby County Coach of the Year in 2018.

In 2019, (41-8) Record breaking season with 5th Area Championship, Regional Championship and Tournament Champions at Oxford and Sumiton Christian Tournament. The Jags ended the season 5th in the State Tournament.

The Spain Park High School Softball Coaching Staff was selected as the 2016 NFCA South Region Coaching Staff of the Year. The Jaguar coaching staff was honored at the NFCA national softball convention in New Orleans.

“I am truly honored and blessed to be a Jaguar. It is extremely important to teach teamwork, leadership, sportsmanship, and a true love for the game of softball while showing pride for our school and community. My passion is to help our athletes receive softball scholarships and play at the next level.”

Her mom Cherie Urse is one of her greatest influences in her life. C.J. has a daughter Emma (14).  They are members of the Church of the Highlands.