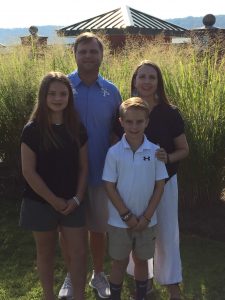 Coach Litton joined the Spain Park staff in the fall of 2016. He coaches Tight Ends and Fullbacks for the football team. He also serves as the Head Boys Golf coach at Spain Park. Coach Litton coached football and golf at Homewood High School from 2009-2016.  While coaching at Homewood, he coached tight ends & fullbacks, wide receivers, and offensive line in football and led the boys golf team to a 5A State Runner-Up in 2014 and 6A State Champions in 2016.  He is a graduate of Homewood High School (1996) and Auburn University (2000). While attending Homewood High School, Coach Litton was a member of the 1995 5A Football State Championship team and also lettered in baseball. Coach Litton and his wife, Allison, have 2 children Laine and Davis.