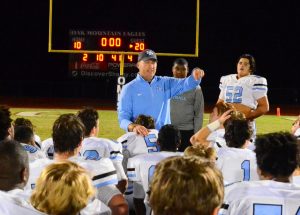 Coach Shawn Raney begins his sixth year as Spain Park’s Head Coach. In 2015, the Jaguars record was 12-2, finishing the season as Alabama’s 7A State Finalist. Coach Raney is a native of Erick , Oklahoma. He was a 2 year starter at strong safety at Northwestern Oklahoma State, where he received All-Conference awards and was twice selected as the conference Defensive Player of the Week. Raney also served as team captain.

Prior to 1999
His coaching career began at Oklahoma State as a graduate assistant before becoming defensive coordinator at Yukon (Okla.) High School where he spent 7 years. During those years, Yukon made five playoff appearances and finished as state runner-up in Oklahoma’s largest class in 1997.